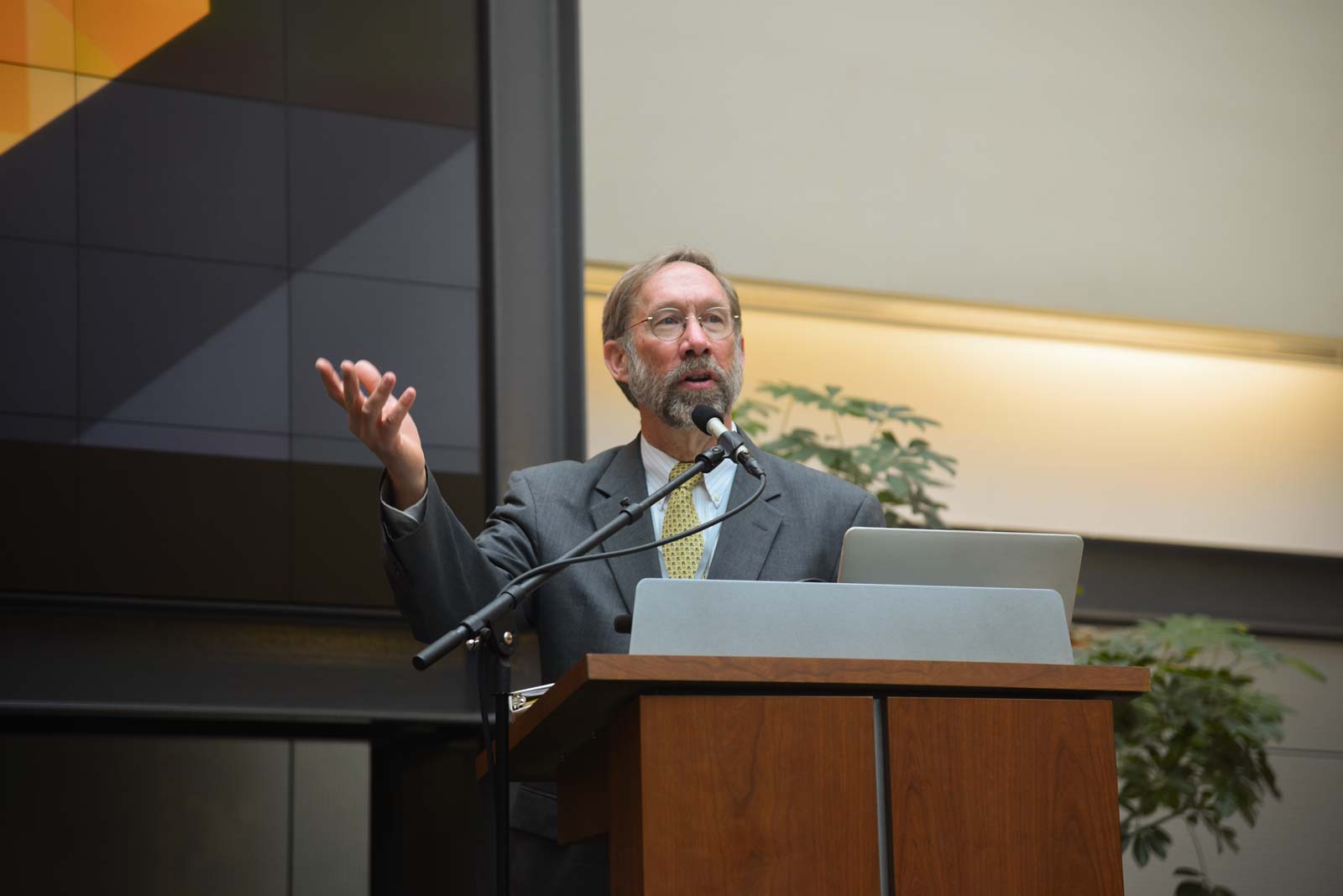 Good afternoon! For those of you whom I don’t know, I am Stan Meiburg, Director of Graduate Studies in Sustainability at Wake Forest. It is my pleasure to welcome you to the University this afternoon for a discussion with a very distinguished panel of practitioners of state and federal policy in environmental protection.

he Federalist principle at the heart of the American constitution, the mutual and shared sovereignty of state and federal government, is vividly on display in the area of environmental protection.

While in the sweep of American history this is still a relatively new discussion, the wave of modern federal environmental laws adopted between 1969 and 1990 sharpened and defined the tension and arguably wise ambiguities built in by the Framers at the nation’s beginning.

For much of the nation’s history, matters we now think of as environmental—whether land use, public health protection, or regulation of industry—were for America’s first 130 years largely thought of as matters of state or local rather than federal concern.

Even with the growth of federal responsibility for land and natural resources in the Progressive Era and the New Deal, the bulk of these responsibilities remained with the states through World War II and the 1950’s.

But things are different today.  On any given day you can read in newspapers, online, or in blogs, if you prefer, about some conflict between state and federal governments over environmental policy.

To help give us some perspective on those conflicts, we are joined this afternoon by leaders who have participated at the highest levels of environmental policy making, as both state and federal officials.

Bob King served as Deputy Commissioner of the South Carolina Department of Health and Environmental Control from 2004 until his retirement in 2012. He previously served as the Senior Associate Deputy Commissioner for many years, and started his career with the Department in 1972, serving in a wide range of positions before moving into executive leadership. King was notably active in national affairs and is a past President of the Environmental Council of the States. He received the ECOS Founders Award in 2013 and remains active as Vice-President of the Environmental Research Institute of the States (ERIS), a 501(c)(3) education and research nonprofit that supports ECOS. King received his Bachelors Degree in General Engineering from the University of Illinois and his Masters Degree in Environmental Systems Engineering from Clemson University.

Gwen Keyes Fleming has more than twenty years of public sector experience, having served as both an elected and appointed official at the state and local levels, as well as in various branches of the federal government. Most recently, she served as the Principal Legal Advisor (General Counsel) for Immigration and Customs Enforcement (ICE) in the U.S. Department of Homeland Security (DHS), and as Chief of Staff to the Environmental Protection Agency (EPA) during the Obama Administration. In addition to her time at the DHS and EPA, Fleming served as the EPA Region 4 (Southeastern Region) Regional Administrator, where she was responsible for establishing and implementing environmental policy for eight southeastern states and six federally recognized tribes. Fleming was twice elected District Attorney for the Stone Mountain Judicial Circuit in DeKalb County, Georgia; the first African-American and first woman to hold that office.

Appointed in 2009 as the U.S. EPA’s Deputy Administrator, Bob Perciasepe continues a career spanning nearly four decades as one of the nation’s leading environmental and public policy figures. He served as a top EPA official in the administration of President Bill Clinton, who appointed him, first, to serve as the nation’s top water official and later as the senior official responsible for air quality across the U.S. Prior to being named to his current position, he was Chief Operating Officer at the National Audubon Society, one of the world’s leading environmental organizations. Perciasepe has also held top positions within state and municipal governments, including Secretary of the Environment of the State of Maryland.

Governor Roy Cooper appointed Michael Regan Secretary of the N.C. Department of Environmental Quality in January 2017. Regan took over the leadership of the state’s environmental agency after spending 18 years working on environmental regulatory and advocacy initiatives. He also spent a decade with the EPA, working in the air quality and energy programs for both the Clinton and Bush Administrations. Regan served as an EPA National Program Manager, designing programs aimed at reducing pollution and finding market-based solutions to improve energy efficiency and overcome climate-related challenges.

Bill Ross currently practices environmental law with the Greensboro and Raleigh, N.C. law firm of Brooks Pierce. From 2001-2009, Ross served as Secretary of the N.C. Department of Environment and Natural Resources. While he was Secretary, the department played a principal role as the state expanded the size of the state park system; enacted the N.C. Clean Smokestacks Act, landmark state legislation that mandated the reduction of harmful emissions from the state’s coal fired power plants by more than 70 per cent; and built the Nature Research Center, an innovative new wing for the North Carolina Museum of Natural Sciences.

Questions for the Panel:

For those of you who have been state or local officials (I think that is everyone), what was the most difficult conflict you faced AS A STATE OR LOCAL OFFICIAL in dealing with the federal government?

The Administration has argued that the states will pick up any protection needed by waters that are not covered under a significantly diminished definition of waters of the United States. What are your views on this topic?

The EPA’s regional offices play a strong role in the operations of the agency, in balancing the twin imperatives of national consistency and local flexibility. How would you compare the relationships you had with the regional office with those you have had with the EPA headquarters?

The Administration has said that it wants to “defer so much more to the states”. Yet the Environmental Council of the States, an organization composed of the leaders of almost all state environmental protection departments, sent a letter to the EPA on September 26th that said they were “seriously concerned about a number of unilateral actions by U.S. EPA that run counter to the spirit of cooperative federalism and to the appropriate relationship between the federal government and the states . . .” Does this mean something significant has changed or is this just business as usual?

There has been much discussion about the Administration’s effort to roll back pollution standards for cars, and California’s resistance to this. What does this mean about Federalism?

One of the challenges we have in our society is the health disparities amongst different parts of the population. What do you think both state and federal policy can do to help proactively address those health disparities from an environmental standpoint?

How do state and federal governments take account of ecosystem service’s economic value in rule making policy or implementation?

What do you believe is the best way to make environmental issues less partisan?

Can you say anything about the intersection of immigration issues and the environment?

What are the most valuable and effective partnerships you have encountered?

Since many of you have worked in all of these sectors, which sector of your work—state, federal or NGO—has been the most rewarding?

We would like to thank these outstanding leaders for sharing their perspectives with us.