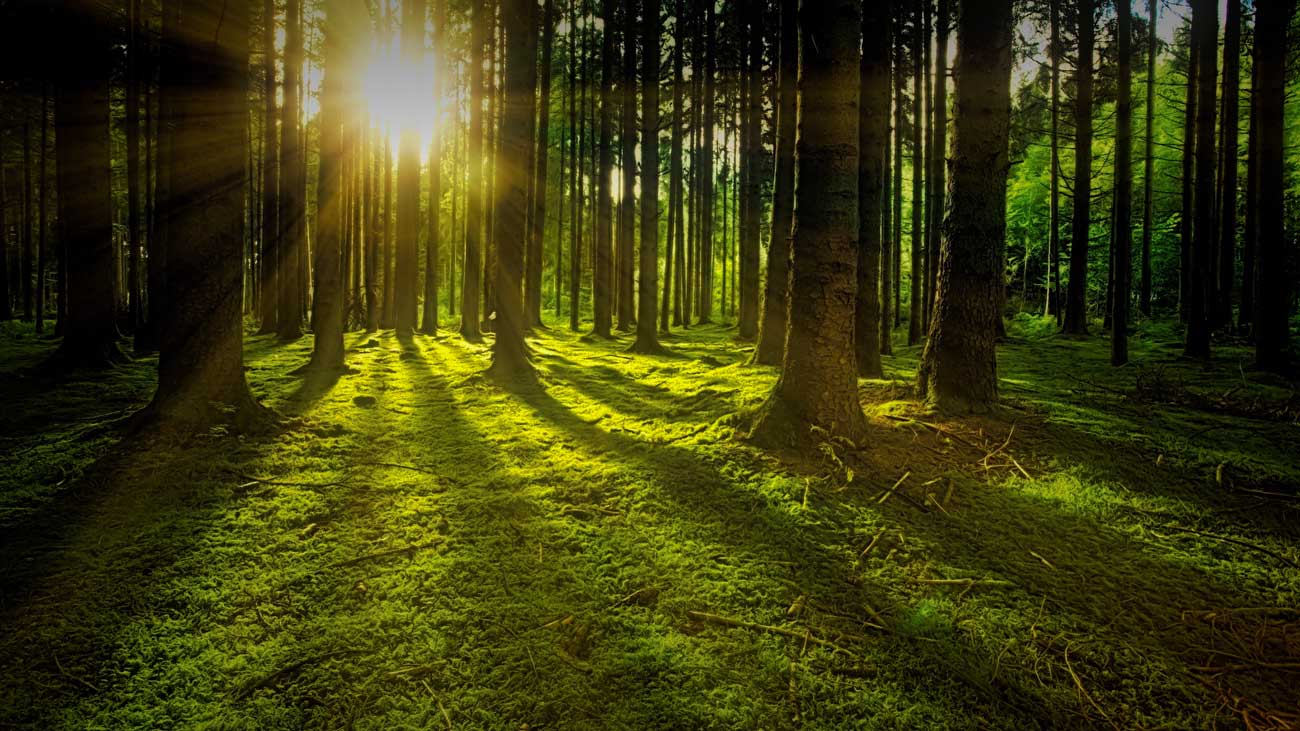 Jay Lanier of Interface delivered the keynote address for the 2019 Sustainability Graduate Programs Student Showcase held at The Graduate School at Brookstown Inn. The event was an end of year celebration to recognize the class of 2019 and welcome the incoming class of 2020. Graduate Students presented capstone projects of their work from the Applied Sustainability course with the Yadkin Riverkeeper.

REES TALK TO EACH OTHER. Now, of course, they lack mouths to render speech and have nothing in the way of language that a linguist could recognize, but they absolutely communicate. I’m currently reading a book by a German Forrester named Peter Wohlleben called The Hidden Life of Trees. He describes how acacia trees on the Savannah of Africa tell one another that a hungry giraffe is out to hit the leaf buffet so its neighbors can immediately create the compounds that make them taste bad.

In the beech and oak forests of his home in the Eifel mountains, Wohlleben talks about the communication through roots that allow bigger, stronger and older trees to share nutrients and water with sick, small and damaged neighboring trees.

It turns out that trees work best in forests. It may be easy to assume that a lone tree, with no need to share its light, water or nutrients would be better off than a crowded group. As it turns out though, that group, with its social bonds could better be thought of as a superorganism, where it is truly more than the sum of its parts.

Grade school biology taught us the survival of the fittest. We, as individuals, automatically tend to interpret that as survival of the fittest individually. But what if we change individual to the word community? Survival of the best community. A close-knit fabric of interwoven roots voluntarily shifting resources to create the maximum benefit for one another and, by proxy, an entire woodland ecosystem. Cooperation that begets abundance. A community that thrives, rather than simply survives.

It used to be that the forest was a truly scary place. How many fairy tales took very dark turns when the Brothers Grimm sent their protagonists …into the woods? So often, it was used as the stand-in for all things unknown, wild, foreign - weighed in equal parts fear but also enchantment. It represented both dread and magic.

So why the discussion about the woods and fairytales at a ceremony focused on your accomplishments in the study of sustainability? After all, many of us will go to work in a system that has grown and has a continued belief in the survival of the fittest individual. And with good reason in many ways. With the rise of our industrial system, the world’s desperately poor has fallen by over 1 billion people in less than 20 years. A physicist would look at such a result and immediately ask, "At what cost?" For much of our history as a species, those costs were negligible, or even outright invisible. But as our 7.5 billion people’s needs begin to ask questions of the earth’s abundance, the limits of exponential growth in a closed system are becoming more and more apparent.

The morality of meeting the basic needs of so many are coming into conflict with the generous systems that allowed for such amazing growth of humanity in the first place.

Back in 1944, the US Coast Guard released 29 reindeer on St. Matthew Island in the middle of the Bering Sea. Some of you may be familiar with the example I am preparing to cite here, but for those of you who aren’t, St. Matthew is a windblown, battered island that would be pretty unpleasant for most people. But it was an absolute reindeer paradise.

Those 29 reindeer grew, thrived and procreated - quite successfully, I might add. There were no forces against their growth and prosperity. By the year 1963, there were not 29, not 290, not 2,900, but 6,000 reindeer on this small island in the middle of the Bering Sea.

By 1965 only 42 remained. They overshot the carrying capacity and abundance of the paradise they had known. One that seemed to have been made just for them.

You might expect, with that kind of correction to a population, they could continue to build their population up once again into something a little bit more sustainable. But by 1984, the last reindeer on St. Matthew Island had perished. The systems that provided for the reindeer had disappeared along with them.

So, once again, why a tale of reindeer collapse in an audience all too familiar with the risks of population overshoot and collapse?

The reindeer of St. Matthew Island, in their own strange way, have brought me here to be with you today. In Paul Hawken’s book, The Ecology of Commerce, he cited this natural experiment in his chapter called the Death of Birth. It was this chapter, that fell into the hands of a founder and CEO of an industrial manufacturing company that was later described as a spear in the chest that lodged in the heart of a man looking for the answer to a simple question: “What is Interface doing for the environment?”

Interface is the world’s largest manufacturer of carpet tile. Back in 1973, Ray Anderson waged his life savings and that of his best friend on a vision of a modular floor that would meet the needs of the modern workplace. It quickly grew into a $1 billion per year business going public in 1983. By 1994, Ray had every reason to be proud of a global business that he built himself, legally, that employed 5,000 people across the world. By all measures of the time, he had earned a relaxing retirement by making something from nothing, playing by the rules.

In Hawken’s conclusion, the
only entity big enough, powerful enough and pervasive enough to reverse these problems was business and industry itself. Interface didn’t have to be the problem, it could be the solution.

But whose rules were those? Upon reading The Ecology of Commerce, he realized that the decline of our biosphere was directly linked to the rise of industrialization. The take, make, waste model of which Interface was built, was doomed to fail someday - the moment our limited resources ran out. Ray was convicted as a “plunderer of the earth,” but there was a silver lining. In Hawken’s conclusion, the only entity big enough, powerful enough and pervasive enough to reverse these problems was business and industry itself. Interface didn’t have to be the problem, it could be the solution.

In response, Ray set Interface on an uncharted course to a goal called Mission Zero, where by the year 2020 we would have zero negative impact on the environment. It was silly, it was audacious, it was ridiculous, but most importantly, it has been incredibly successful. Typically, sustainability initiatives are viewed as expensive window dressing handled by the marketing department. But when you take the time and commit to learning from the master of efficiency and innovation, Mother Nature, the inspiration for both people and product is astounding.

I’m pleased to announce that on net we have met our Mission Zero goal, but much like the Hippocratic Oath in medicine, doing no harm is only the first step in curing a broken system.

In our next chapter, we have begun what we call The Climate Take Back, using Interface as a model business that creates our products and systems in a way that sequesters atmospheric carbon, just like a forest. In fact, we produce a carpet tile already that when made leaves less climate-changing CO2 in the air than had it never been made. It will be available here in the US next year. In this new vision for our business, we have begun our first steps to emulate the cooperative systems that the longest-lived residents of our planet already have mastered. We like to call it Factories as Forests. And we are doing much better than surviving. We are thriving.

All of this started from one exceptionally sane, or monumentally crazy, idea that business, industry and commerce have a lot to learn from nature. We may not have the next Ray Anderson in this room with us today, but I wouldn’t bet against it. Do you know where Ray got that copy of Hawken’s book? Not some other big shot exec or policy guru. It came from Joyce Lattelle. A salesperson in the Bay Area who gave the book to Ray on a whim months before. Monumental change often begins with small gestures.

Many of you will go on to work for organizations with a clear purpose to affect the greater good using sustainability as a guiding principle in your mission. Many of you will go to work in organizations that don’t live up to the morals you hold dear in conserving our planet. I am here to tell you that both roles are critical to our local and global communities. Think back to the trees we began discussing. If they serve as a model for the next industrial revolution, they are built as competing to be the most cooperative and to be systems that create abundance and generosity at every exchange, then you are the stewards of that forest. You are the guides.

You are the ones who can show others that the future isn’t scary for all its vastness and still unknown secrets. You can (and will!) show them that this future as a forest is a place of refuge, of wonder, of abundance and magic. Be the leaders who show them the forest so they can truly see the trees.