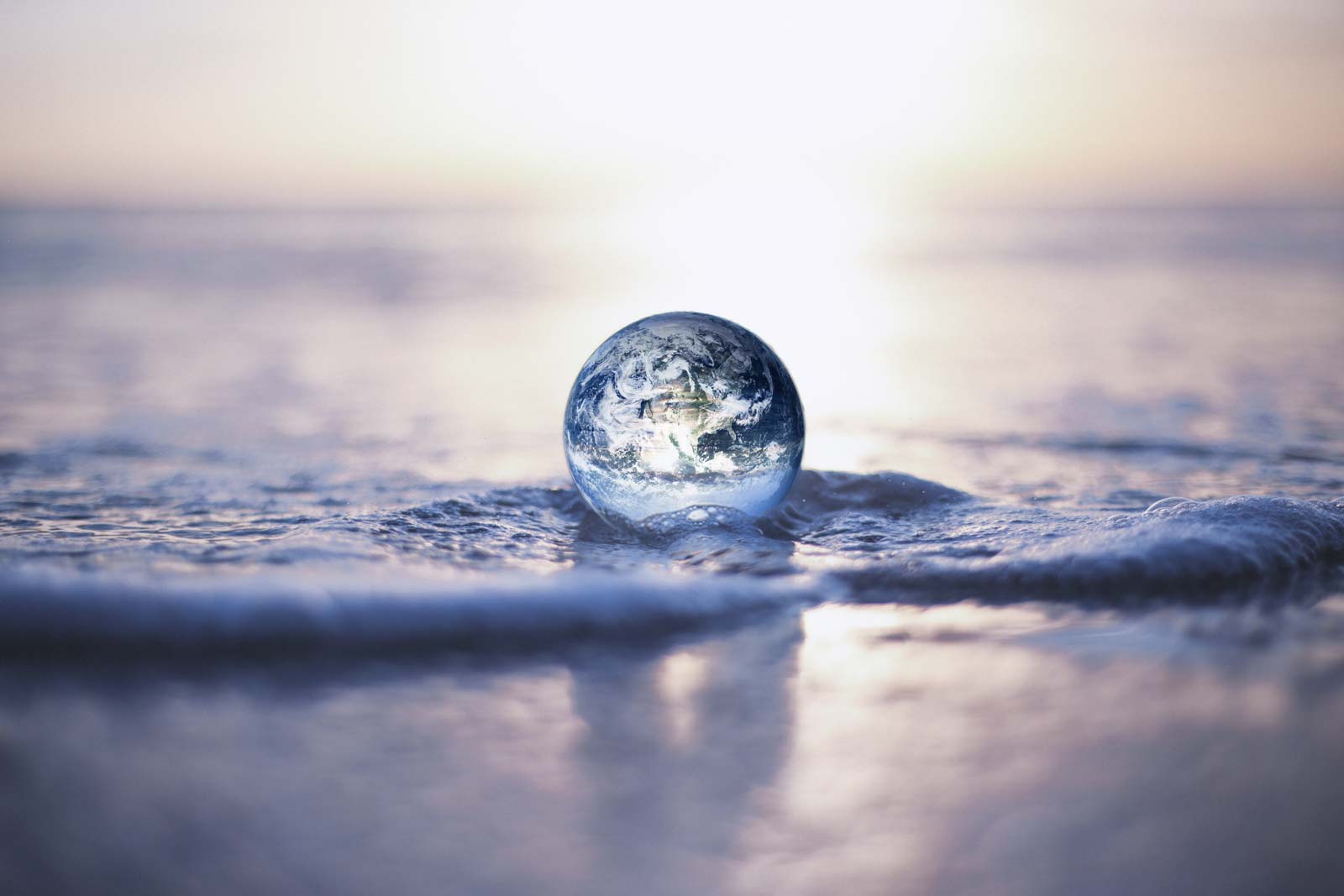 The Easter season coincides with Earth Day.In reflecting on this, I found myself contemplating the story of Dives and Lazarus, from Luke 16:19-31.

T'S A FAMILIAR STORY. Dives is a generic name for a rich man, and Lazarus was a beggar at his gate who hoped for scraps from the rich man’s table. Both died, and while Lazarus was carried by the angels to Abraham's bosom, the rich man wound up in torment. Yet he could see Abraham far away, and Lazarus in his bosom, so he called out to Abraham to have pity and send Lazarus to dip the tip of his finger in water, to "cool my tongue." But Abraham said, 'Son, recall that in your lifetime, you received your good things, while Lazarus likewise received his bad; so now here, he is comforted, and you are suffering.'

Then the rich man said, “I beg you, father, please send him to my father's house, since I have five brothers, so that he can be warning them not to also come to this place of torment. But Abraham said, 'They have Moses and the Prophets; let them listen to them.' And he said, 'Hardly, father Abraham; but if someone from the dead goes to them, they will repent.' And Abraham said, 'If they are not listening to Moses and the Prophets, neither will they be persuaded if someone rises from the dead.'

This sobering tale is relevant to our changing climate. In this story, Jesus is pointing out that the Old Testament contains in itself an urgent call to repentance. But this story also illustrates how hard it can be for us to look at things in a new light.

For us, the signs of a changing climate are all around. It is not just something our children will have to worry about; it is with us now. Oceans, which absorb half of the carbon emitted into the atmosphere, are warming and becoming more acidic, affecting marine life across the globe. Sea levels are rising, glaciers are melting, and the Arctic ice cap is shrinking and may disappear in summer entirely by 2050. This is not just a problem for polar bears; it’s a problem for us, even if you don’t own beachfront property or haven’t been the victim of extreme weather events such as flooding, drought, or fires.

The 4th National Climate Assessment from the U.S. Global Climate Research Project, released by the U.S. government last November, found that more frequent and severe heat waves will increase stresses on the energy system, amplifying the risk of more frequent and longer-lasting power outages that could affect other systems, such as access to medical care.

U.S. agriculture and the communities it supports are threatened by increases in temperatures, drought, heavy precipitation events, and wildfires on rangelands. Yields of major U.S. crops (such as corn, soybean, wheat, rice, sorghum, and cotton) are expected to decline over this century due to increases in temperatures and possibly changes in water availability, disease, and pest outbreaks.

This is unfortunate, because to feed a growing world, we will need to produce more food in the next 50 years than in the past 10,000 years combined (and waste less, since 40% of the food that’s produced now in this country goes to waste).

“. . . the evidence of human-caused climate change is overwhelming and continues to strengthen, the impacts of climate change are intensifying across the country, and climate-related threats to Americans’ physical, social, and economic well-being are rising."

So Moses and the prophets are in the building.

Unfortunately, this isn’t the only parallel with the Dives and Lazarus story.

The poor and disadvantaged are those least likely to escape the effects of climate change.

Look at the burdens imposed on Puerto Rico by Hurricane Maria.

The island was far less resilient than, say, Houston, in responding to almost total destruction of the island’s infrastructure.

A study by an economist at Stanford found that global climate change has increased economic inequality between countries by 25% as compared to a world without warming.

What will happen now depends on what we do. A business as usual approach could produce levels of carbon dioxide in the atmosphere that the planet has not seen for at least 30 million years.

So why do we have such a hard time talking about climate change?

While the effects of climate change are clear, the details of how it happens are complicated. That’s how science progresses. But scientists agree that something is going on, and we are causing it. As a recovering regulator, I could only wish for cases where 97% of the published, peer reviewed scientific studies on any subject came to the same conclusion—yet that’s what we have here.

How Can We Best Equip our Students to Become Change Agents?
Environmental educators face increasing pressure to provide students with the education, tools, and opportunities to overcome the threat of climate change.
Tree Species Struggle to Adapt to Climate Change
Tree species that are most vulnerable to the impacts of rising global temperatures may require intervention to adapt to changing climatic conditions.

Occasionally people say that the climate is in God’s hands. Riding in a cab in March, I heard an evangelist on the radio say that we didn’t need to worry about climate change—that Jesus is coming soon, and it won’t matter. Others, sometimes deliberately, read the Genesis creation story to argue that the earth is ours to exploit.

This is an abdication of the responsibility that God gives us. We are stewards of the earth and have an obligation to manage it wisely, like the Parable of the Talents in Chapter 16 of Luke that precedes the story of Dives and Lazarus.

A more common reaction to the threat of climate change is one that taps into one of our most powerful motivating forces, something that triggers our deepest values: fear.

If fear is at the heart of our inability to be in conversation about climate, that should lead us back to our faith.

Jesus’ call to us is clear: “Do not be afraid.”

It is not helpful to fight fear with fear.

Martin Luther King, Jr., in his famous speech at the March on Washington, did not say, “I have a nightmare.”

The antidotes to fear are faith, humility and hope.

There are signs of progress.

In April, the Energy Information Administration announced that for the first time since they began keeping records in 1973, electric power generated from hydro, biomass, wind, solar, and geothermal sources will outpace coal in April and May. We can help this trend continue.

I remain optimistic that we can come to terms with climate change. We have met other tough challenges that seemed impossible.

I tell my students that when they see pictures of smog in Beijing and New Delhi, they should remember that 50 years ago this was New York and Los Angeles.

Since then, U.S. air pollution has improved dramatically even as we grew our economy, increased our population, drove more miles, and increased our use of energy. It’s a great American success story (though some of those increases created new challenges!).

So what can we do?  Lots of things!

My favorite Earth Day t-shirt slogan is "No act too small, no one too small to act.”

I want to emphasize the social things we can do.

When we follow Jesus’ injunction about what to do for the least of these—improving housing, health, shelter, education, economic opportunity—evidence suggests that all of these things will help our world address climate change.

We are not asked to be perfect.  We are asked to love our neighbor as ourselves.

The words of the hymn apply here: “How shall we love Thee, holy hidden being,if we love not the world that Thou hast made?”

We know that Creation is good. We also know that our opportunity, and our sacred obligation, is to keep it that way.

Dr. Stan Meiburg is the Director of Graduate Studies in Sustainability at Wake Forest University in Winston-Salem, North Carolina and a member of the Diocesan Chartered Committee on Environmental Ministry.

Originally published at The Episcopal Diocese of North Carolina on May 31, 2019.

Photography credit for main image: Josh Sorenson on Pexels and WikiImages on Pixabay.