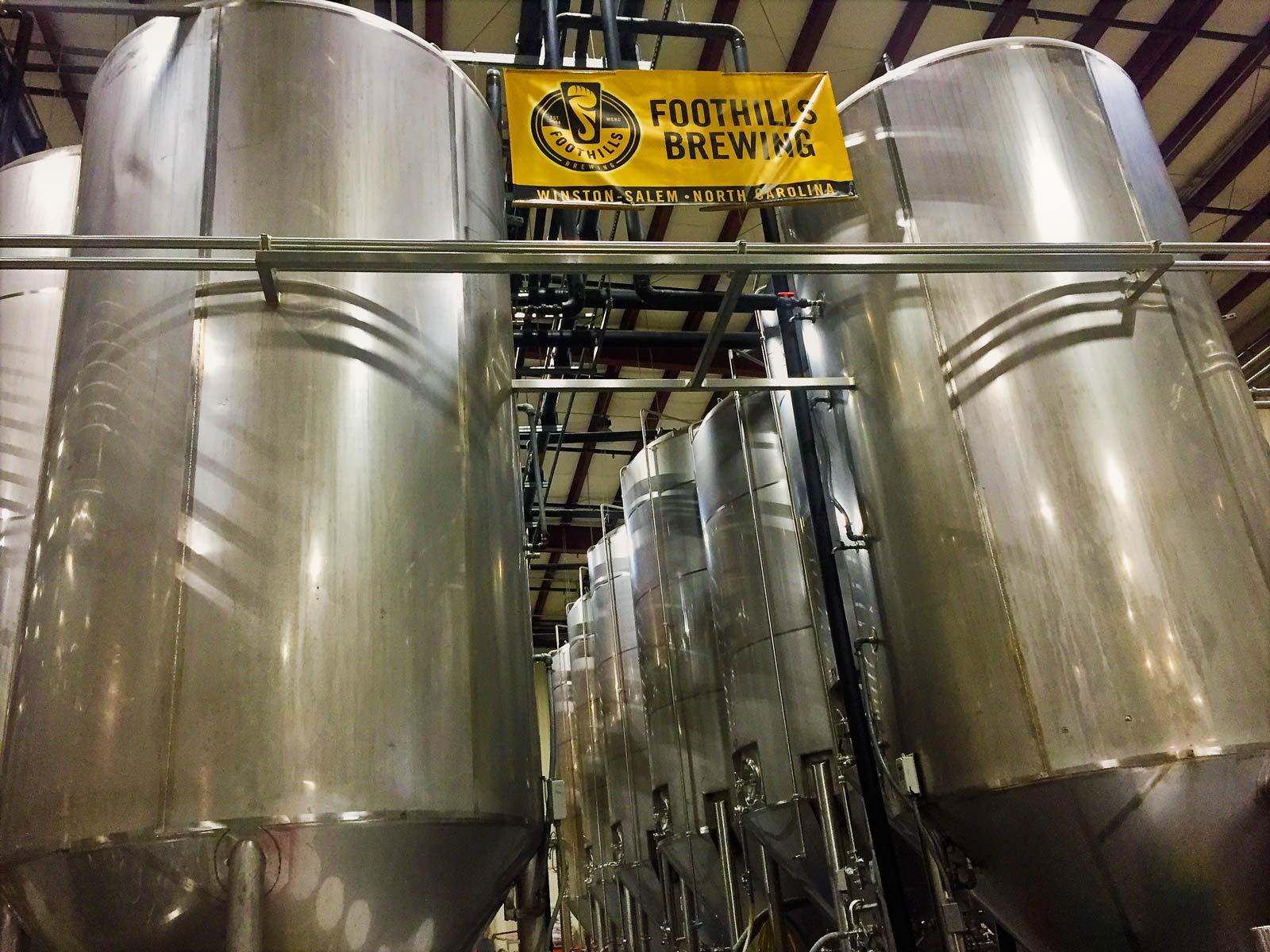 If you’ve lived in Winston-Salem for more than a few weeks, you’ve heard of Foothills (and if you’re over 21, you’ve also probably been there for a beer). Foothills Brewing is the largest craft beer brewer in town, and certainly one of the most popular. They operate a downtown brewpub, a tasting room at their warehouse, and even a café where they serve their own roast coffee. In addition to serving their brews locally, Foothills also distributes to sellers across the South, expanding their reach beyond just the state of North Carolina.

s Foothills continues to scale up their operation, founder and president Jamie Bartholomaus is constantly considering new ways to increase the brand’s sustainability and operations efficiency. Recently, on a tour of the Foothills' warehouse for a group of Wake Forest University Masters of Sustainability students, Bartholomaus described his team’s strategy for assessing brand sustainability. This starts by looking at the entire life cycle of their products and tackling access points for change in materials, resource and energy usage, and waste, while also carefully weighing the costs of these changes and their impacts on profitability.

‍
Some of the easiest access points for change have been in the brewery’s water and energy usage. Recent innovations like adding insulation to the giant steel boilers used for heating water have dramatically reduced the amount of energy used in the brewing process. Water usage is also limited, as the water used to transport heat around the brewery is recycled, with only a small amount lost after each steam cycle.

From a social sustainability standpoint, Foothills is committed to giving back to local organizations. Each month, the brand creates a special brew as part of their Craft Happiness IPA Project, where portions from the sale of each brew go toward a different charity. October’s Equus IPA supported the protection of wild horses at North Carolina’s Outer Banks.

While the brand is taking some important steps to advance sustainability, Bartholomaus says there is always room for improvement. “We’d like to do more, but we can’t afford it.”

Financing is certainly a barrier to implementing new technologies, especially at the scale of a craft brewery without the available capital of a large commercial brewer. One of the potential projects Foothills considered was putting a full solar array on the roof of their warehouse. This could cut their electric bill by over half, but the funding just isn’t there. Despite the future savings, the upfront cost is simply prohibitive.

However, large-scale efficiency projects are not the only way to pursue sustainability. Bartholomaus prioritizes investing profits into his employees, citing worker retention as one of his main concerns. Employees at Foothills make “above the market rate” for brewery workers in the area, and while it may restrict the environmental budget, fair wages are a core principle of social sustainability in business.

Many of the sustainability initiatives Foothills would like to implement require strong partnerships with other local businesses, partnerships that Bartholomaus is still trying to create. For example, stronger relationships with the farmers who grow the grain for Foothills’ brews could allow for greater efficiency in grain usage and disposal. Optimizing the timing of grain deliveries would reduce spoilage, and the post-production grain pulp could be sent back to the farm as animal feed. Add a partnership with a local composting company into the mix, and the excess grain and brewing waste could also be turned into fertilizer for the farms they came from.

Despite these challenges to implementing increased sustainability, Foothills Brewing has achieved some impressive reductions in resource and energy consumption. They are also committed to giving back to their workers and the communities they operate in. While economic considerations often take the front seat in company operations, Bartholomaus remains hopeful that Foothills' environmental and social footprint will continue to improve.