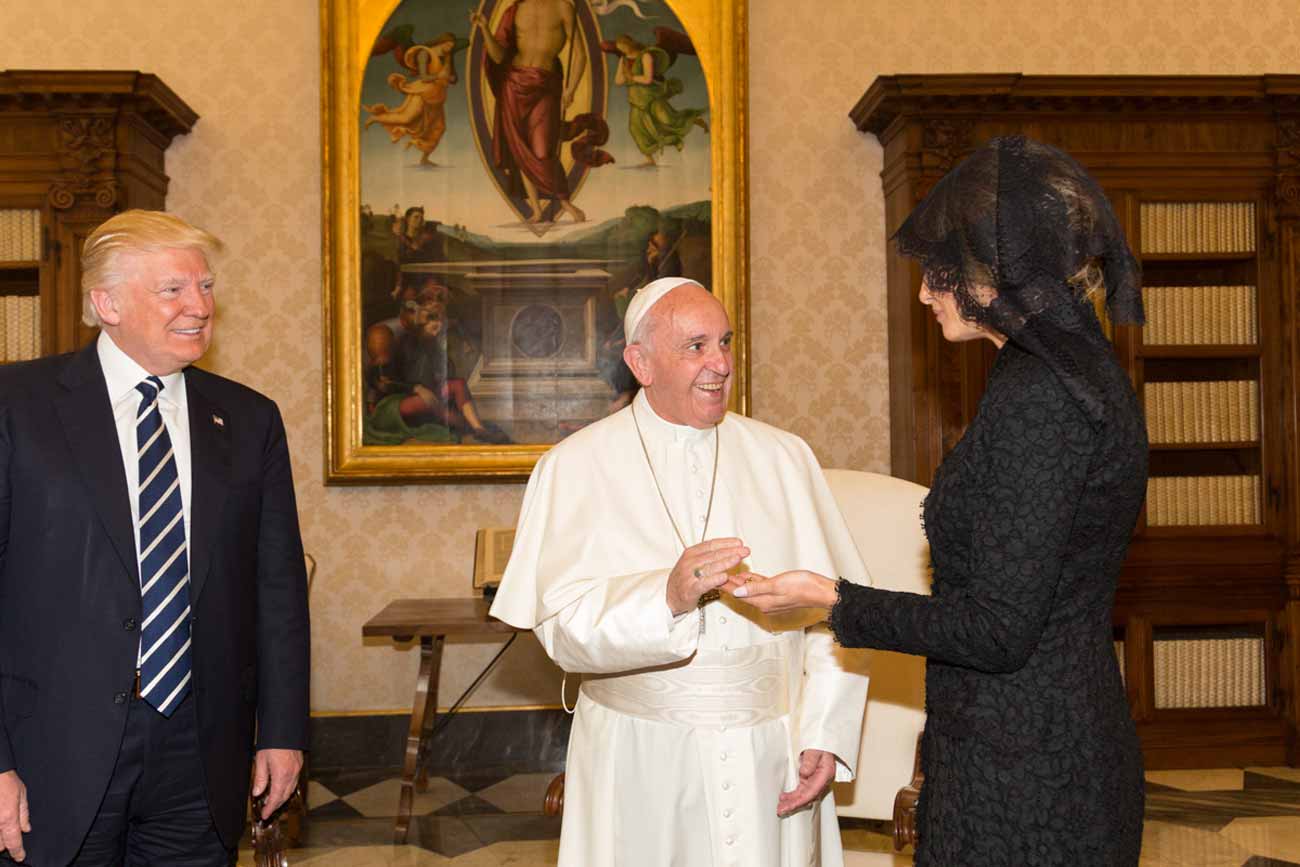 Two years after Pope Francis launched Laudato Si, the Vatican’s plea to save the earth, Trump rejected its tenets and the Paris Agreement. But people of all faiths are unified globally to beat climate change.

OPE FRANCIS gave Trump a copy of his encyclical on global environmental protection during the president’s visit to Europe in May. A week later, Trump pulled out of the Paris Climate Agreement.

While the majority of U.S. Catholics voted for Trump, and polled less favorably toward the pope after publication of Laudato Si, his bold plea to save the Earth continues to energize leaders of all faiths.

Examples abound: in May, 55 “emerging faith leaders” from 17 countries met in Brazil to identify realistic renewable energy and sustainability projects for their nations. Also in May, nine large Catholic organizations from around the globe announced divestment from coal, oil and gas stocks.

On May 24, a grim-faced Pope Francis handed a signed copy of Laudato Si to President Trump during his visit to Rome. The U.S. president, who has called climate change “a hoax,” promised to read the papal encyclical, a spiritual and secular plea to save the earth from environmental destruction.

A week later, Trump announced plans to yank the United States out of the 2015 Paris Agreement, whose prologue was influenced by the principles embodied in Laudato Si. In doing so, Trump repudiated 195 nations’ pledges to reduce their carbon footprint to mitigate the worst effects of climate change; he repudiated Pope Francis and his encyclical as well.

Two years after the release of Laudato Si — and long after its intense global attention has faded — it’s worth asking: is the uncompromising and unprecedented Catholic teaching document fulfilling Vatican expectations by uniting leaders of all faiths, along with their billions of congregants, to take decisive climate action “in care for our common home”?

The answer is a qualified, “yes” — based on evidence from interviews with a range of faith leaders, recent conferences, signed pledges and a host a concrete actions, large and small, in congregations and seminaries around the world.

“There is an assumption that if religious leaders let the pope talk about [environmental protection], it will usher in rapid, large-scale change,” said Fletcher Harper, executive director of GreenFaith, a U.S-based interfaith environmental activism organization with an international reach.

“That’s magical thinking. It’s not how the world works. What matters is discipline in determining long-term work by faith groups. It’s not happening as fast as I’d like it to, but it’s underway,” he said.

Harper offered up his own organization as an example of incremental progress. GreenFaith conducted a training session in Brazil in May with 55 “emerging faith leaders” from 17 countries. The goal: promote environmental awareness and identify realistic renewable energy and sustainability projects that can be achieved in each country. But harvesting the fruits of the seeds planted at that international meeting will take considerable energy and time.

Push and Pull Among Catholics

The Catholic church in the U.S. has been slow to embrace the encyclical and its call for action. The pope’s popularity there dropped with the encyclical’s release on June 18, 2015; too few pastors are preaching environmental protection from the pulpit, Catholic insiders say; and polls revealed that a majority of American Catholics voted for Trump.

Cardinal Peter Turkson, president of the Pontifical Council for Justice and Peace which oversaw the research and writing of Laudato Si, said in a 2016 interview: “We are not unaware of the tensions the encyclical has presented in some places.” Noting that wealthy U.S. Catholic donors tend to be conservative politically, Turkson lamented, “You cannot bite the hand that feeds you, but we hope to change that.”

Slowly, that change in coming.

On May 10, nine large Catholic organizations — one global, five from Italy, two from the U.S. and one from the United Kingdom — announced their divestment from coal, oil and gas stocks in what was deemed “the largest Catholic fossil fuel divestment to date,” by the Global Catholic Climate Movement.

“This statement aims to be the first concrete commitment in the logic of the integral ecology and the care of our common home, which Pope Francis called us to,” said Archbishop Tomasso Valentinetti of Pescara-Penne, Italy.

Sister Sheila Kinsey, who is based in Rome and is on the steering committee of the Global Catholic Climate Movement, added, “Laudato Si and its spirit are still alive, and more and more relevant, considering that climate action is a crucial issue on the international political agenda.”

She noted that on January 27, more than 125 international organizations — including a host of Catholic congregations, universities, along with environmental groups such as Greenpeace and 350.org — gathered in Rome for a conference titled “Laudato Si and Catholic Investing.”

Meanwhile, in Benin in East Africa, where each Catholic diocese maintains its own farm, sustainable agricultural training centers inspired by the encyclical are growing in number. And across Australia, a number of Catholic schools are heeding the Vatican call to invest in solar panels to cut carbon emissions and save energy costs.

“The pope doesn’t expect this movement to just be a Catholic thing,” said longtime Vatican observer Robert Mickens, English editor of La Croix International in Rome. “What is extraordinary about the encyclical is that it is a project that the whole human race can engage in together. What unites all of humanity? The environment. It’s our common home; our common interest.”

As if to underscore that point, 33 faith-based groups from around the world signed the Interfaith Statement to World Leaders at the 22nd United Nations Climate Summit in Marrakesh, Morocco (COP22), last November. They pledged their commitment to the goals of the Paris Agreement — and by extension, Laudato Si.

Gopal Patel is director of the London and India-based Bhumi Project, launched in 2009. Among its goals, the project promotes ways for Hindu communities to jettison coal for renewable energy, and to improve waste management and reduce pollution around temples. He signed the interfaith statement at COP22.

“All religions have been doing environmental work for a long time,” Patel said. “What Laudato Si did, and continues to do, is ensure that faith voices are heard in the broad climate space. It was the biggest kind of support that the faith movement could get to show that we have something to say about caring for the earth.”

Patel couldn’t help but mention Pope Francis’ gift to Trump: “The pope could have given him many things. A punch in the face? Whatever. But he gave Trump Laudato Si, right? That’s another opportunity for the faith community to say, ‘We’re still relevant and so is this message.’”

Echoing a persistent theme in Laudato Si, he added, “One of the primary responsibilities of human beings to is ensure the maintenance of that universal harmony and balance that is creation.”

Nana Firman, co-founder of the Global Muslim Climate Network, recalled that in early 2015 — before Pope Francis made known his intention to produce Laudato Si — Muslim environmental leaders were drafting a statement in support of the UN climate negotiations to occur in Paris at year’s end.

“We were discussing how to bring our position to the forefront. Then the pope released Laudato Si [in June 2015] and we were, like, perfect! It stimulated and inspired us,” Firman said. “Two months later, we released the Muslamic Declaration on Climate Change.”

Since then, she stressed, “a lot has been going on, even if it hasn’t received much media attention.”

“We are launching a campaign of clean-energy mosques in the Middle East and North Africa,” she said. “The government of Morocco committed to transforming its 15,000 mosques around the country to renewable energy by 2019. Jordan has the same commitment to transform to solar energy.”

Firman described hardware (projects) and software (Muslim leaders) that are being mobilized to help the poor and those most vulnerable to climate change. She spoke of joining the battle to fight rampant deforestation in Indonesia, and of the need to take action in low-lying Bangladesh, which is threatened by sea-level rise. More challenges await in drought-prone sub-Saharan Africa, she acknowledged.

“We are training imams as environmental scholars to speak from the pulpit to the community and to the public,” she said. “When people come to the mosque, they see solar panels and they learn about why they are important. All of this is connected to our faith. We are stewards upon this earth.”

Faith and the Pace of Change

For all the anecdotal evidence of progress, an undertone of impatience resonates in the faith-based community, just as it does among environmental leaders. Carbon emissions are still increasing; the Earth experiences record temperatures year after year; sea-level rise and extreme weather are the norm.

Almost everywhere, the scale of investment and the pace of social change trails the quickening march of climate change.

In the United States, dozens of seminaries — mostly Protestant — are integrating environmental education into their theological training. A younger and bigger generation of clergy is being urged to ramp up the urgency in their parishes for local and governmental climate action.

But the hope and promise of Laudato Si could remain beyond human reach without even more aggressive and engaged faith leaders mobilizing the billions they represent in all corners of the globe to pressure their governmental leaders and to act on their own.

“My students are excited and they want to take this on, but the challenges are so big,” said Tim Van Meter, an associate professor of ecology and justice at the Methodist Theological School in Ohio. “People are just tired. It seems inevitable that we will drive ourselves to collapse.”

Then, in an instant, Van Meter shook off that gloomy perspective: “One of the core understandings of what it means to be a person of faith is that you can’t give in to despair. You have to live out of hope. As tired as we might get, I know we are working toward a greater good. And we will continue in this work.”

Originally published at Mongabay.com on June 13, 2017.