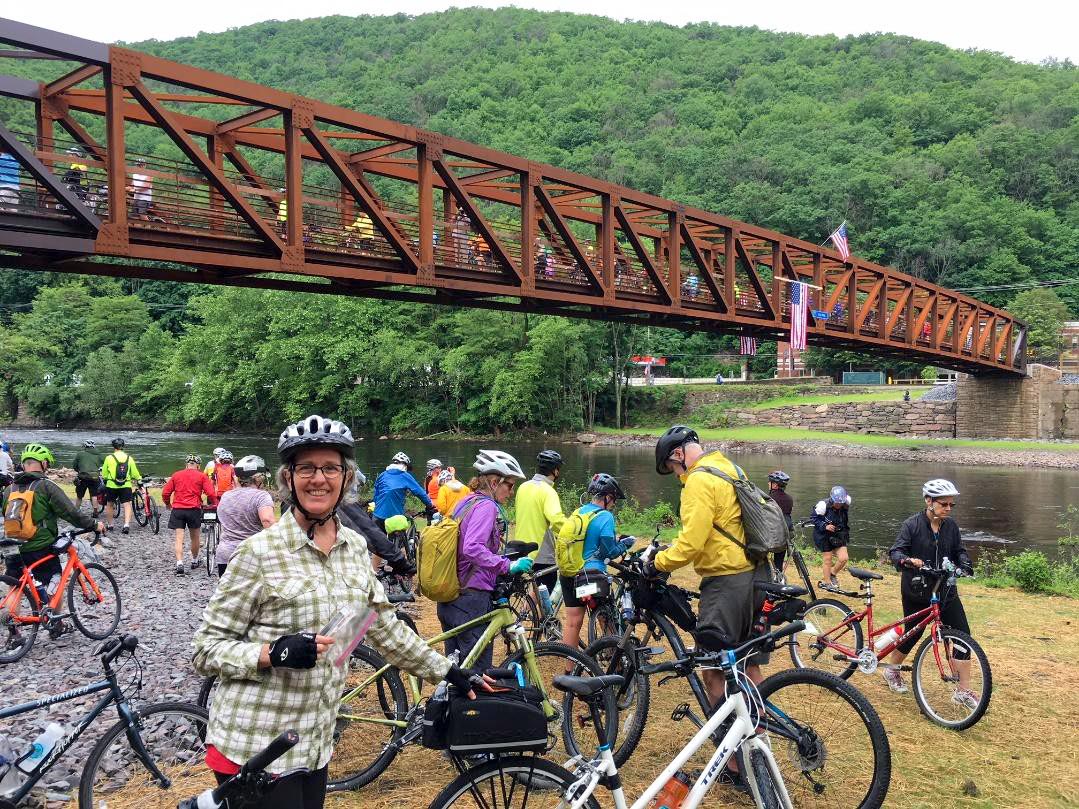 A Perspective from Cycling

Last week, my wife Julie and I participated with 300 other riders, ranging in age from 11 to 79, on a bicycle trip sponsored by the Rails to Trails Conservancy on the Delaware and Lehigh Trails system in Eastern Pennsylvania. It was an amazing adventure! Over five days we rode 180 miles, mostly on canal towpaths built in the 1830’s to move anthracite — a hard, hot, smokeless coal — from northeastern Pennsylvania to markets in Philadelphia and New York.

This journey was an opportunity to reflect on the relationship between sustainability and change. The canals, largely dug by hand, were in their day the most efficient way to move products to market. Communities grew up around locks and canal intersections, and an entire culture arose to service the canal boats, supply the mules that pulled them, and exchange upstream coal for downstream manufactured goods.

Anthracite production peaked in 1917 at 99.8 million tons but steadily declined through the rest of the 20th century to between 1.5 and 3.0 million tons per year now. The canal business is long gone. Railroads supplanted them, but many rails in their turn have been abandoned. Old telegraph poles, their lines long gone, stand as silent witnesses to the power of new technology. But the infrastructure remains, and the repurposing of that infrastructure as hiking and bicycle trails offers hope and new economic opportunities to residents of that part of Pennsylvania.

It’s impossible not to see this and think of what will become of the infrastructure we are building today. In a century, will large scale electric transmission grids be replaced by combining decentralized renewable energy with residential or commercial scale storage, so that utility rights of way become new trail opportunities? Will our ubiquitous gasoline stations become the equivalent of yesterday’s barge canal locks, as electric vehicles expand? What purposes will today’s office buildings serve if work becomes more and more decentralized?

The ride is really cool! Who knows what adventures you’ll have?

None of these things will happen overnight, just as the barge canals continued to function even into the 1930’s. The point of sustainability is not to think just in terms of what will happen tomorrow, but what will happen in succeeding generations and to anticipate, as best we can, the legacy that our actions will leave for them. The motto of the Scouts is appropriate: leave your campsite cleaner than you found it.

Consider the work that our ancestors put into the canals, railroads and coal mines of the 19th and 20th centuries. They could not have imagined how we are now using these structures, just as here in Winston-Salem it would have been hard to imagine Wake Forest’s use of former tobacco buildings for biomedical research. Changes will occur, and our job in sustainability education is to train ourselves as leaders with enough imagination to keep the future in mind.