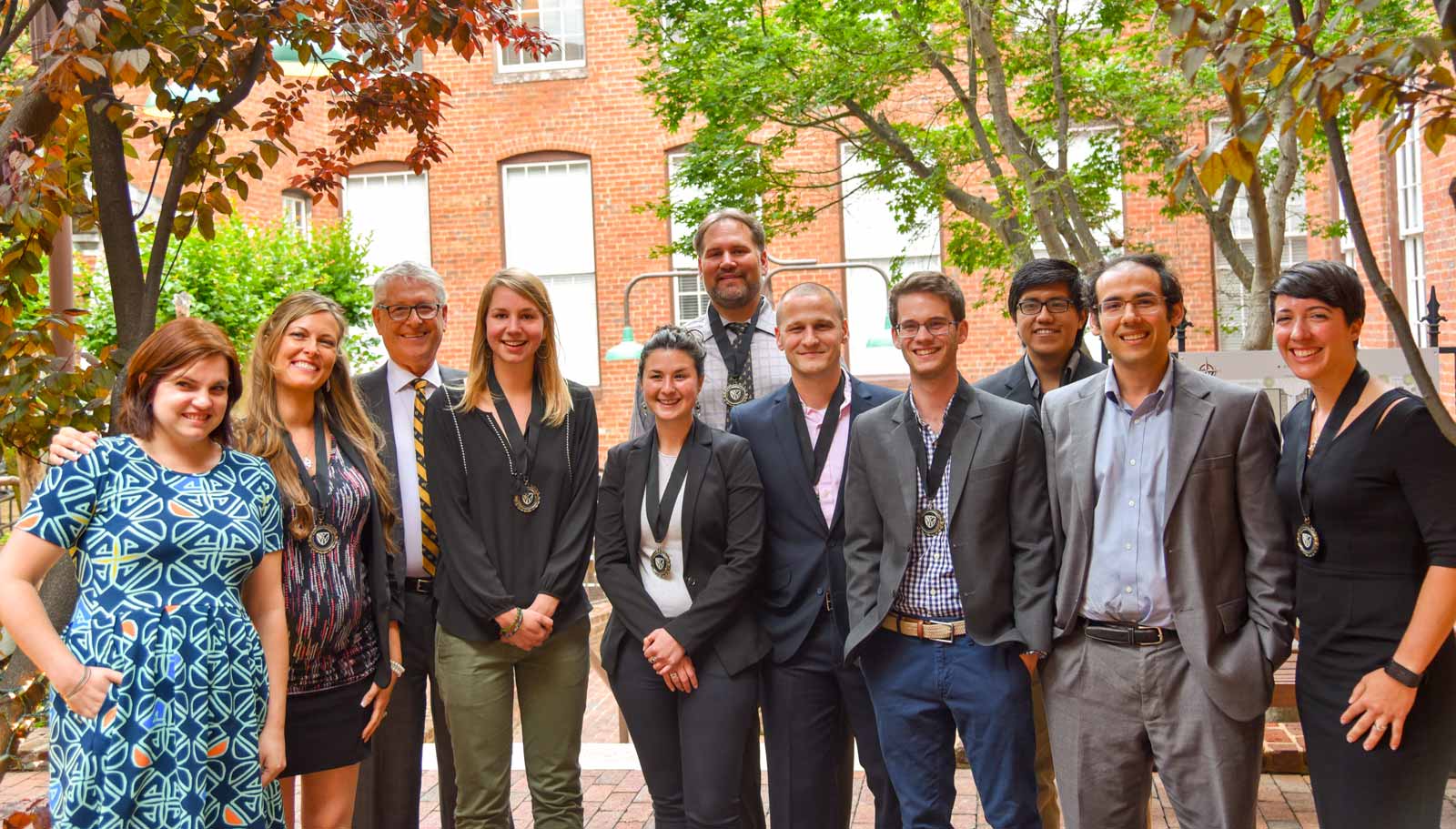 To the Graduating Class of 2017

from the Masters Programs in Sustainability at Wake Forest University.

This is a plea to use your education to craft possibilities and to create and maintain connections to address important issues in our world!

HEN YOU GRADUATE, you will be closer to the Wake Forest University family which, to me, is a special privilege, accomplishment, and resource. You are part of a special, wide network of people dedicated to using their education to attack important problems, sharing the pro humanitate value, that is, that we use our education to attack important problems in society — however, society is defined for you.

And in a global world, this value is so important. The quest for truth, the quest for a better society, the quest for what mark we will make on this world… all presuppose allowing others to speak, allowing victims to be visible, allowing social issues to be put on the agenda of those with power. We anticipated that you will have the power to make a difference and to hear about and act on the needs of our world! We have tried to arm you with tools, knowledge, and perspectives to craft possible approaches to the critical problems our world faces and your organizations face, but not to do so alone — to use your connections to Wake Forest University to make a difference — to make your mark on the world. Only those of you who are looking for a technical trick to contribute to civilization, or more personally for you, using education just to get ahead or to find fast, formulaic solutions to persistent problems in our society, will feel despair. But those who believe, in all modesty, in the mysterious power of their own human being, in crafting possibilities and in creating and maintaining meaningful connections to people and to important institutions — have no reason to despair at all.

That universities endure in this way testifies powerfully that universities are special institutions, and all of us are privileged to be the inhabitants of such a place. If you attend the larger commencement you will hear repeatedly that your diploma from Wake Forest comes with rights and responsibilities.

“So here we are…approaching commencement… life’s great forward-looking ceremony. (And don’t say, “What about weddings?” Weddings are one-sided and insufficiently effective. Weddings are bride-centric pageantry. Other than conceding to a list of unreasonable demands, the groom just stands there. No stately, hey-everybody-look-at-me procession. No being given away. No identity-changing pronouncement. And can you imagine a television show dedicated to watching guys try on tuxedos? Their fathers sitting there misty-eyed with joy and disbelief, their brothers lurking in the corner muttering with envy. Left to men, weddings would be, after limits-testing procrastination, spontaneous, almost inadvertent… during halftime… on the way to the refrigerator.”

But this ceremony… Wake Forest University commencement… a commencement works every time. From that day forward… truly… in sickness and in health, through financial fiascos, through midlife crises and passably attractive sales reps at trade shows in Cincinnati, through diminishing tolerance for annoyingness, through every difference, irreconcilable and otherwise, you will stay forever graduated from Wake Forest University, you and your diploma as one, ’til death do you part.

Before you walk into the graduation ceremony and immediately afterwards embrace those who supported you and offered you advice, financial backing, and companionship. You may want to realize that it was the village that made this day possible for you.

I suggest you make a bingo-like card with the likely words you are to hear in the graduation ceremony. This process is not an original idea as I played this game at earlier graduations I attended. My experience is from 50 or more graduations, being a professor and father. Now, with the bingo card, when you do get a “BINGO” from listening to the various speeches and ceremonial acts, do not scream out but quietly smile in self-satisfaction. Yelling out will only impede the ceremony — with one crucial exception. If any speaker tells you to find your passion or some rendition of this phrase, yell loudly “BOOOOOOOOOOOO.”

Lots of people don’t have a passion at your age. Listen to the May 9, 2013 NPR segment “I Know I’m Supposed To Follow My Passion. But What If I Don’t Have A Passion?” One of your contemporaries, Max Kornblith, two years out from an Ivy League school, was honest about his predicament and his and the narrator’s suggestions are sound for moving forward in life.

My suggestion is that you use techniques you learned in your science and design thinking classes. Do experiments. Create hypotheses and test them. Be a working scientist. The only difference is that you are experimenting with your future — trying to identify ways that you can live happily. Design your life with prototypes!

My other problem with passion is its self-centered focus. Follow your passion means you do not have to listen to others; that you feel a sense of entitlement; are the center of Earth. This behavior is acceptable when trying to obtain optimal outcomes in an economic system, but when it comes to family, friends, the community at large, self-interested behavior will get you a lonely seat at the table.

Speaking from experience, as one who often followed his passion, step back and listen to others. Engage people in conversation and be involved in their tales and reflect on their lessons learned. You will be amazed at what you can learn. This lesson came late in my life. Yet, do not put up with the bull that drags you down — the people who only tear down institutions, tell you that you are not “suited for this work,” that you should “be realistic,” and that you should be nice to fit in. Push them and yourself to be positive and encouraging, continually try out new behaviors. This mindset helps you commit to a happy life and one that will make a difference in this world.

My advice is to look for something you can commit to — commit until your research says to do something else. There are lots of ways to live our lives, and there are lots of lives to live before you kick the proverbial bucket. Enjoy and help others enjoy.

You will fail several times — embrace it and know that you are not alone! As far as I can tell the people who use systems — who work hard, who analyze their life, who commit to something, take risks, and who keep slogging away are the ones who gain success. My favorite animals are the bumblebee and turtle — the bee because it is not supposed to fly given its design and the turtle because it has to stick its neck out to get started.

Find out what you do well and do it — do it everywhere. Also, do not discount luck and your network — the most useful thing you can do is stay in the game. The universe has plenty of luck and you just need to keep your hand raised until it’s your turn.

Your involvement in your profession and the larger world in which we live is asking a lot of each of us. I believe that you will thrive by being persistent, being involved and maintaining the connections to those who have shared this educational experience with you while using your education with a social perspective.

I’ll tell you a little known story about Dylan Thomas, the amazing poet from Wales who died at 39 and which helps me to think about our world. Some years back the critic John Malcolm Brinnin wrote a book about Dylan Thomas which embodied a faithful but very particular perception of the poet, one that stressed his sad, last, drunken, coming apart days in New York. It was an affront to Thomas’s widow and she engaged in a heated exchange with the critic using a phrasing that was profound. Caitlin Thomas did not say that Brinnin had told lies, or that what he had reported had not occurred. She did not say he was in any narrow or measurable sense “wrong,” because he was not. She said, “I know a better truth.”

A better truth, not necessarily a more positive or friendly or comfortable one, or even a contradictory truth, but one that is larger, roomier, more complex and more authentic than any one-shot version can be. That is what an education offers you — to create a larger, roomier, more authentic future that addresses important issues in our world and allows for all sorts of identities to enter. [1]

I’ll end with the last stanza of Tennyson’s short yet dramatic monologue “Ulysses,” a vivid reminder of the constant struggle to solve life’s problems — staying in the game, keeping your hand raised. Ulysses, old and restless as king of a remote and savage island, sets forth in search of knowledge and experience, accompanied by a few veterans of battles. As the small band pushes to sea, Ulysses says,

We are not now that strength which in old days
Moved earth and heaven; that which we are, we are
One equal temper of heroic hearts,
Made weak by time and fate, but strong in will
To strive, to seek, to find, and not to yield.

Now craft the world you desire, as your future is created when you use your education to craft possibilities and maintain and create connections to attack important issues.

Thank you for your work this semester and in the program and all the best in your future.

[1] I ask each of you to design one question you want people of the world to answer. Please take your question and post it on social media sites of your choice. Please share the answers with colleagues and create active dialogues with world citizens on these and other topics. We are interdependent in this global world so let’s create connected, world-wide dialogues to better empathize with each other and develop a greater tolerance for differences among us. Create narratives that solve problems and create solutions to solve social challenges. And do so to be inclusive of many different people.