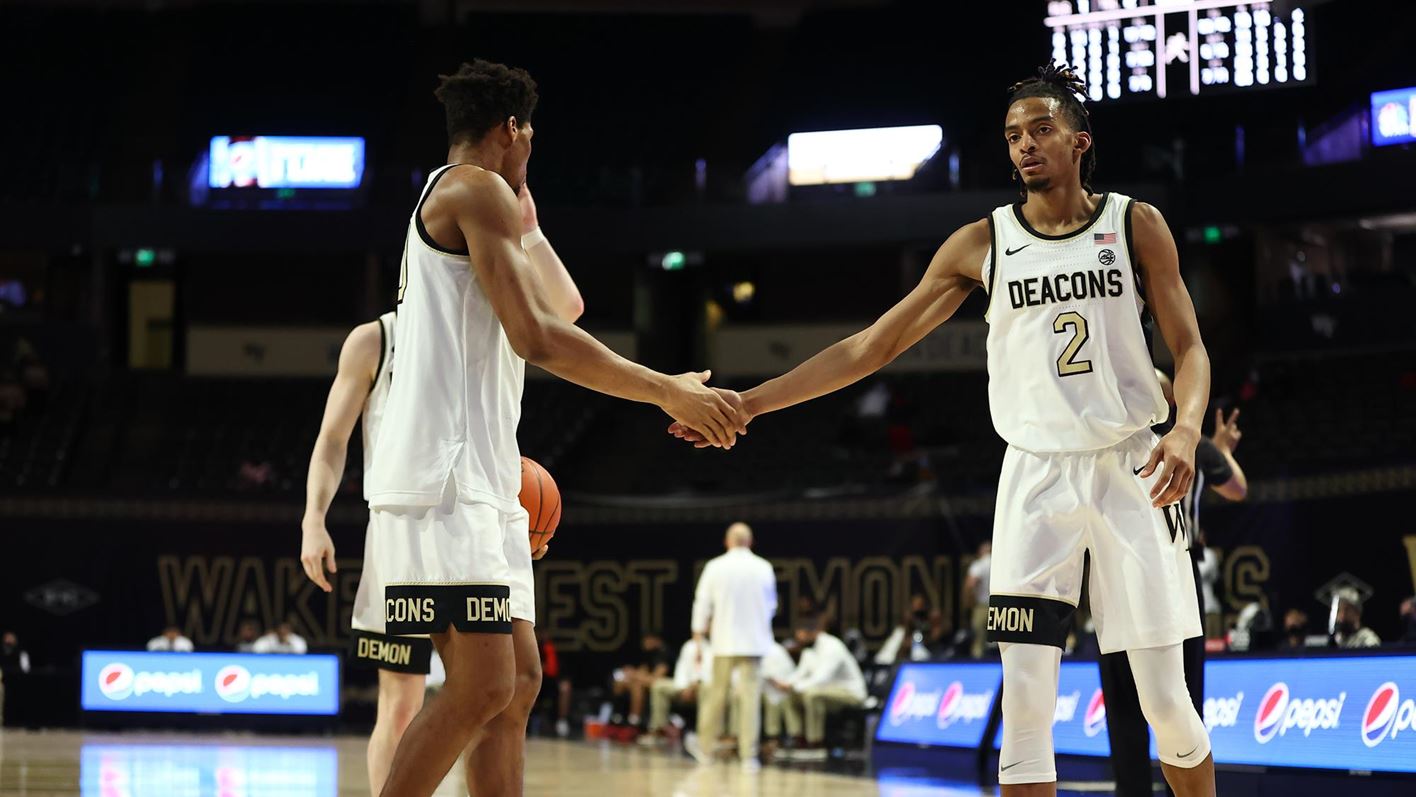 Wake Forest Athletics will have many stories and content throughout Black History Month on GoDeacs.com and through all team social media accounts. Information and profiles shared are archived here.

In numerous ways, maybe this is where Johnson has belonged all along.
He's finding a certain appeal to being part of setting the foundation in his era of the program.

WINSTON-SALEM, N.C. -- Being involved is something that Jalen Johnson has taken seriously on and off the basketball court.

‍
As a newcomer to the Wake Forest men's basketball program, that helped him create an identity among so many things that look different these days.

‍
This was nothing new to Johnson, who joined the Demon Deacons on a rather winding path that followed the hiring of head coach Steve Forbes.

‍
In numerous ways, maybe this is where Johnson has belonged all along. He's finding a certain appeal to being part of setting the foundation in his era of the program.

‍
"The opportunity to try to build something new with a new coach," he said.

‍
This union between Johnson and the Demon Deacons was several years in the making.

‍
"Wake Forest was actually my first offer," he said. "It comes full circle. It's crazy."

‍
Johnson's connections to the Wake Forest program tend to be aplenty. He played in high school for Wesleyan Christian Academy alongside Brandon Childress, whose four-year career with the Demon Deacons ended last March. His younger brother played in youth levels with Carter Whitt, who became a teammate when joining the Wake Forest team in December as an early-entry freshman guard.

Make no mistake, Johnson's athletic background is well-founded by his parents. Mom Nikki Berry was on the University of North Carolina track and field team. His father, Brian Johnson, was a sprinter for East Carolina.

‍
"I've got some pretty blessed genes," he said. "They helped me understand it's not going to be easy. Just knowing you have that support system."

‍
He lives in Durham, then went to high school in High Point, attending Wesleyan Christian Academy and playing for former Maryland standout Keith Gatlin. A certain independence developed for the younger Johnson as he left home to stay with a host family during those school weeks.

‍
Those at Wesleyan Christian Academy found it easy to admire Johnson, who was among a core of notable Division I-level basketball recruits to pass through during a period of a few years. Johnson stood out in ways that stretched beyond basketball.

‍
"Just a wonderful young man. A lot more than just a basketball player," one administrator said. "He liked to be involved."

‍
Johnson's artistic abilities were being groomed and his knack for fitting in – joining a singing group, for instance – expanded his popularity.

‍
His next stop was Tennessee, where he played on a nationally ranked Volunteers team. That included a matchup against the Demon Deacons – on the same day that the Wake Forest football team was winning the 2018 Birmingham Bowl.

‍
About to be a Tennessee graduate, he explored options to continue playing college basketball. He embraced what Forbes had built at East Tennessee State, deciding to join the Buccaneers – before another shift occurred about a week later last spring.

‍
That's when Forbes was hired to direct the Demon Deacons. Johnson, intrigued by the coach and the idea of playing closer to home, embraced the chance to be part of this.

‍
"I really like Coach Forbes and his style of play, and I think that really gelled with me,"

‍
Admittedly, Johnson held attachments to many things in Knoxville. Now he's fully cognizant that there's a shorter period of time to make inroads as a player while with the Demon Deacons. So he was anxious to get started with those pursuits.

‍
Yet before moving to Winston-Salem, there was time spent with family in Durham during weeks of relative inactivity trying to wait out the pandemic. That's when Cash entered his life.

‍
Johnson went to Knightdale and adopted the American Bully puppy. "I feel like everybody got dogs during quarantine," he said.

‍
Then came less comforting subjects. As social issues emerged during the summer, the Demon Deacons were intent on doing their part in bringing awareness to those topics.

‍
Johnson's creative talents were put to use when he developed the design for the team's warm-up T-shirts to bring more attention to issues that are valued by his teammates and coaches.

‍
"They brought the idea around that we wanted to do something," he said of the movement to bring awareness to social justice and equality topics. "It's important to educate each other on these issues. … bring that to the attention of the communities. I was definitely wanting to do that."
Johnson said his design work is one of his off-court passions, so he awaits the next opportunity to showcase his knack for that.

"Just trying to get more artwork out there," he said.

‍
Perhaps Johnson's contributions in several areas come as no surprise. When he joined the Demon Deacons, Forbes suggested the player would be a good fit because of his maturity.

‍
"He understands what success looks like, and I expect him to provide leadership to our team on and off the court," Forbes said. "He is a gifted offensive player and will be an excellent addition to our university community."

A view of the bigger picture tends to trend with Johnson's other interests. His studies at Wake Forest involve addressing environmental concerns to help produce a cleaner and greener planet. That makes it an extension of his connection to the outdoors and soothing activities such as fishing.
—
Yet his platform includes basketball.

The Wake Forest season began with a couple of victories – with significant contributions from Johnson in the Delaware State game in the opener – before the Demon Deacons paused activities and were without games for a month as the team dealt with coronavirus issues. The launching of the Atlantic Coast Conference schedule started with a series of hard-luck results before Wake Forest broke through for its first ACC victory over Pitt – with Johnson playing an important role.

‍
Of course, with coronavirus protocols and limitations on fans in attendance, that has reduced the chances for Johnson's loved ones to see him in action. He was pleased that his mother could attend a January home game vs. Louisville at Joel Coliseum, though his grandparents had yet to see him play in person.

‍
"COVID has impacted everything," he said.

‍
During some of the challenging times for the young team, Johnson said he hopes to be a positive influence. He has been through the ups and downs of several seasons with teams on the college's top level.

‍
So when the 23-year-old talks about the Demon Deacons being on the verge of a breakthrough, it comes with considerable background. He said the team has accepted the concept that there's a climb ahead that's worth taking.

‍
"I definitely feel old, like a fossil out there," Johnson said. "I definitely try to add tidbits of information."