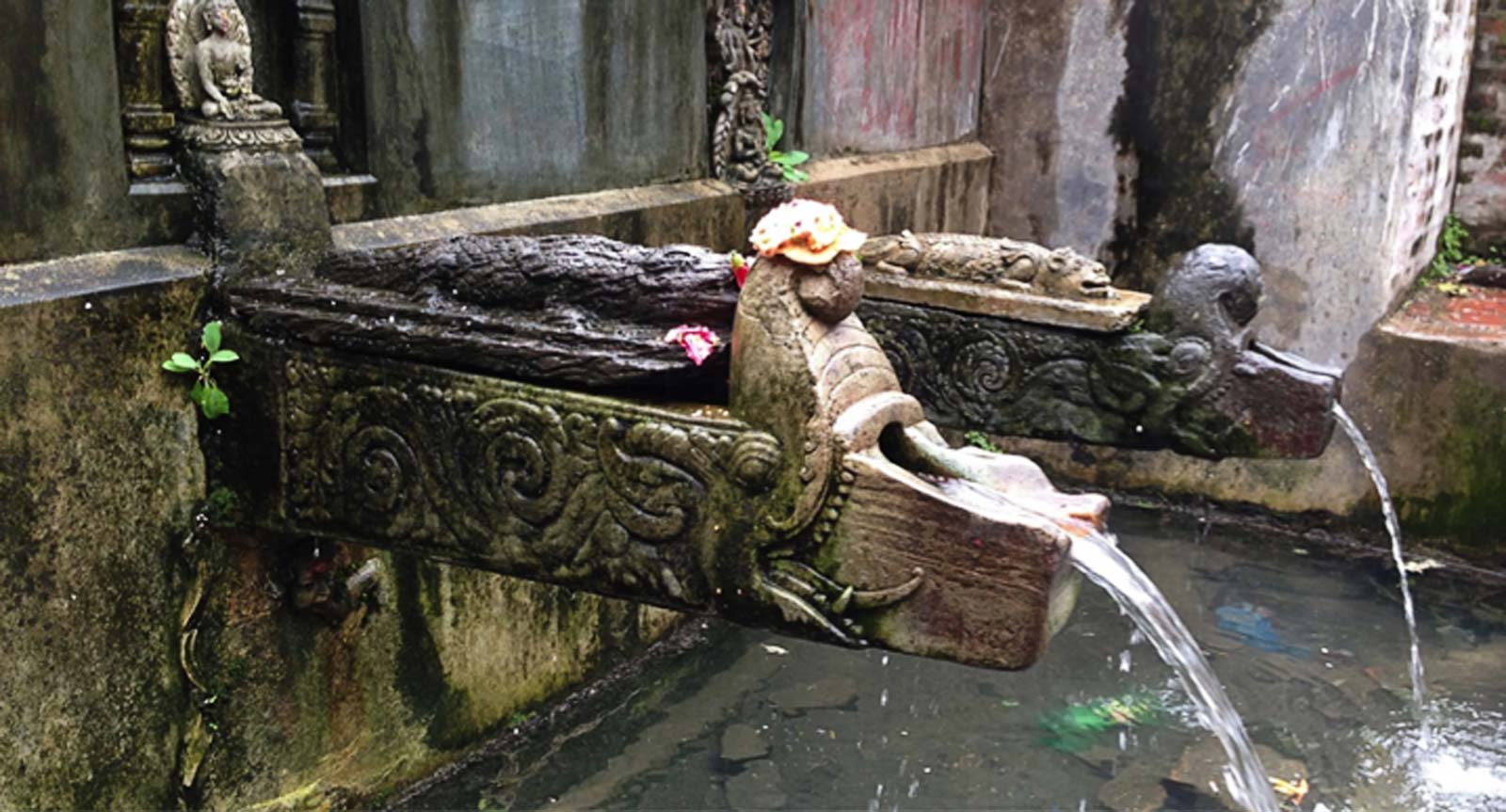 URING THE SUMMER OF 2014, I was a legal research intern at the International Center for Integrated Mountain Development (“ICIMOD”), based in Kathmandu, Nepal. The primary project I worked on during my two months at ICIMOD was researching the legal intersection between intangible cultural heritage and water management laws, to develop greater protections for Kathmandu Valley’s ancient stone spout water distribution network. The following is a short background of this amazing water distribution network.

Stone spouts are an important water supply system fast disappearing from the Kathmandu Valley. A stone spout, dhunge dhara in Nepali or hiti in Nepal Bhasha, is “a channelized spout of water serving as a tap with a shrine attached.” [1] The system uses gravity and rainwater to transport and store water through wells, ponds, canals, pipes, and conduits. While there were once 389 functioning stone spouts situated as a comprehensive water distribution network across the Kathmandu Valley, 45 no longer exist and 68 have run dry. [2] Of the remaining stone spouts, 43 (illegally) connect to city supply lines and 233 still flow naturally “serv[ing] as independent water sources catering to approximately 10% of Kathmandu’s population.” [3]

From their installation in 550 C.E. to the mid-1900s, stone spouts have been one of the Kathmandu Valley’s primary water sources and an important element of the local cultural heritage. [5] Over the past 20 years, with increasing political instability and declining government funding, municipal pipelines have also fallen into disrepair. Due to the unreliability of municipal pipelines, many people now rely on stone spouts for water because they may be more dependable and are often free.[6] Supplying “2,946,542 liters per day in dry season (March-May) and about 7,696,091 [7] liters per day in wet season (July-September),” [8] stone spouts across the Valley remain a legitimate water source, especially for the urban poor.

In the Kathmandu Valley, many Hindus and Buddhists rely on the water flowing from certain stone spouts for daily or auspicious pujas. A puja is “the act of showing reverence to a god, a spirit, or another aspect of the divine through invocations, prayers, songs, and rituals.” [9] If the stone spouts’ water flow continues to dry up, a diverse range of religious and ethnic groups in the Valley will lose vital access points to worship and drinking water. While conserving stone spouts will not solve the Kathmandu Valley’s water situation, stone spouts do provide water stability and represent a fundamental element of the Valley’s intangible and tangible cultural heritage. [10]

[3] NGO Forum For Urban Water and Sanitation, Traditional Stone Spouts Enumeration and Mapping in the Five Municipalities of the Kathmandu Valley, 2009.

[7] These figures of stone spout discharge reflect data taken prior to the April 25, 2015 Earthquake that struck Kathmandu Valley.

[8] NGO Forum For Urban Water and Sanitation, Traditional Stone Spouts Enumeration and Mapping in the Five Municipalities of the Kathmandu Valley, 2009.

[9] Smithsonian Institution, What is puja, 1997, https://www.asia.si.edu/pujaonline/puja/background.html