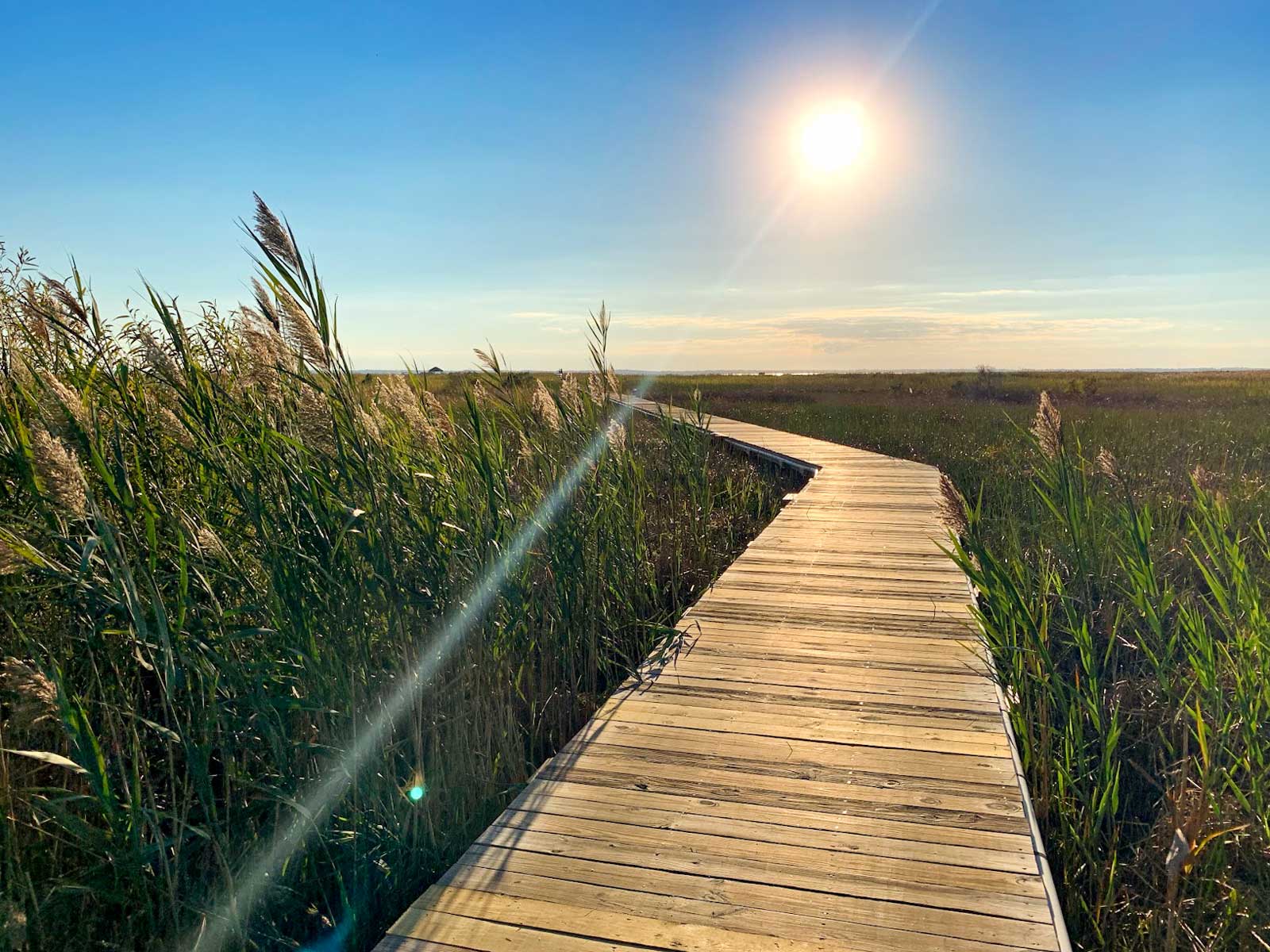 WENT TO THE OUTER BANKS (OBX) for the first time this fall as part of the annual trip offered by the Sustainability Graduate Program at Wake Forest University. My decision to finally travel to the area was long awaited as a native of North Carolina. The program was intended to allow students, a mix of graduates and undergraduates (like myself, a junior), to engage various stakeholders on hot button pressing issues of climate change and sea level rise. We had discussions with people holding many different viewpoints — some native to the area — about how they have historically engaged with the environment and its evolution.

While driving toward the coast, the landscape began to melt into the horizon — becoming the linear plane that separates the terrain from the sky. The clever elevation of the slightest hill of the Piedmont, or the mountains of the western part of the region disappeared as the land transitioned into the sea. Coming upon the vastness of the ocean was surreal, not because it was the first time I had seen it, but because the number of times you experience it doesn’t change its presence and ecological reputation.

Finding a seat on the steps of Coastal Explorations, an ecotourism business in Corolla, we settled into a conversation with Buddy Ponton, a retired commercial fisherman of 60 years. Buddy’s demeanor was cheerful with a hint of charismatic wisdom. He knew what he was talking about. His information was nontraditional; his expertise came from experience. Buddy carried himself like someone who has been at the helm of a ship of a life well lived. Upon listening to the answers to the various questions about the environments, it was apparent that he was not ignorant of climate change per se, just how much it affected the area. He knew things had changed, especially with regard to fishing regulations, he was just not quick to say why. Buddy’s responses were not unlike how many people react on the coast of North Carolina. It was so within the local character, though, that prior to our departure to the edge of NC we were briefed on alternate language, as “climate change” and “sea level rise” would likely produce negative reactions. Framing the conversation and choosing words carefully was key to getting the answers and support you sought.

Much of the conversation centered around economics, as the areas of Duck, Kitty Hawk, Cordova, etc. are tourist dependent. Coming from a very limited background on the subject, I was forced to pay greater attention to the businesses that we interacted with. We spoke with a member of the Twiddy Realty team, a major real estate company in the area. Eddie Ponton, the son of Buddy Ponton from the day before, had much to say about practices and culture. We had interesting conversations about the area while riding down the beach in a restored, vintage bus that I was sure would give out towards the end of the trip. Our questions resulted in fruitful, and sometimes unexpected answers concerning legislation, housing, and outer banks culture. Eddie, also a native of the area, presented his ideas from an economic worldview, as a realtor, but also as someone who grew up in the area helping his dad clean the fishnets.

We also had the pleasure of speaking with Robbie Fern, the Director of the Pine Island Audubon Sanctuary. He spoke to the history of the sanctuary that had actually been a hunting lodge before being donated to the Audubon Society. I found the conversation fascinating especially with a business deal that had saved the sanctuary. Half of the sanctuary was sold to land developers to keep the other half protected indefinitely. Robbie explained the importance of the sanctuary for so many birds that live there year-round and while they are migrating. The idea of tradeoffs was fresh in my mind — the idea that you might have to give something to save everything, especially when it comes to conservation.

The Ancient Egyptians believed in a creation story wherein a stone rose up from the dark water of nothingness, and from there everything took shape and purpose. Although this is a myth from another time, I cannot help but see similarities in the Outer Banks. The people have a connection to the water, it is their world and experience. The place has changed, being leveled and covered in million dollar rental properties that are continually threatened by ocean-front flooding and hurricane damage. With all of this though, with the feeling of being edged out of the area they call home, the locals have no intention of leaving. Their roots are too deep — they are stones that have risen from the Atlantic and have a purpose in the landscape they love.

IN PARTNERSHIP WITH TWIDDY & CO. REALTORS

Travel to the Outer Banks to see the impacts of climate change and sea-level rise along the coast of NC in our Coasts & Climate Change travel course. Students meet with land managers, conservation organizations, and local businesses like one of our Program Partners, Twiddy & Company Realtors. Learn how businesses like Twiddy & Company live with changing landscapes and how they are planning for the future.