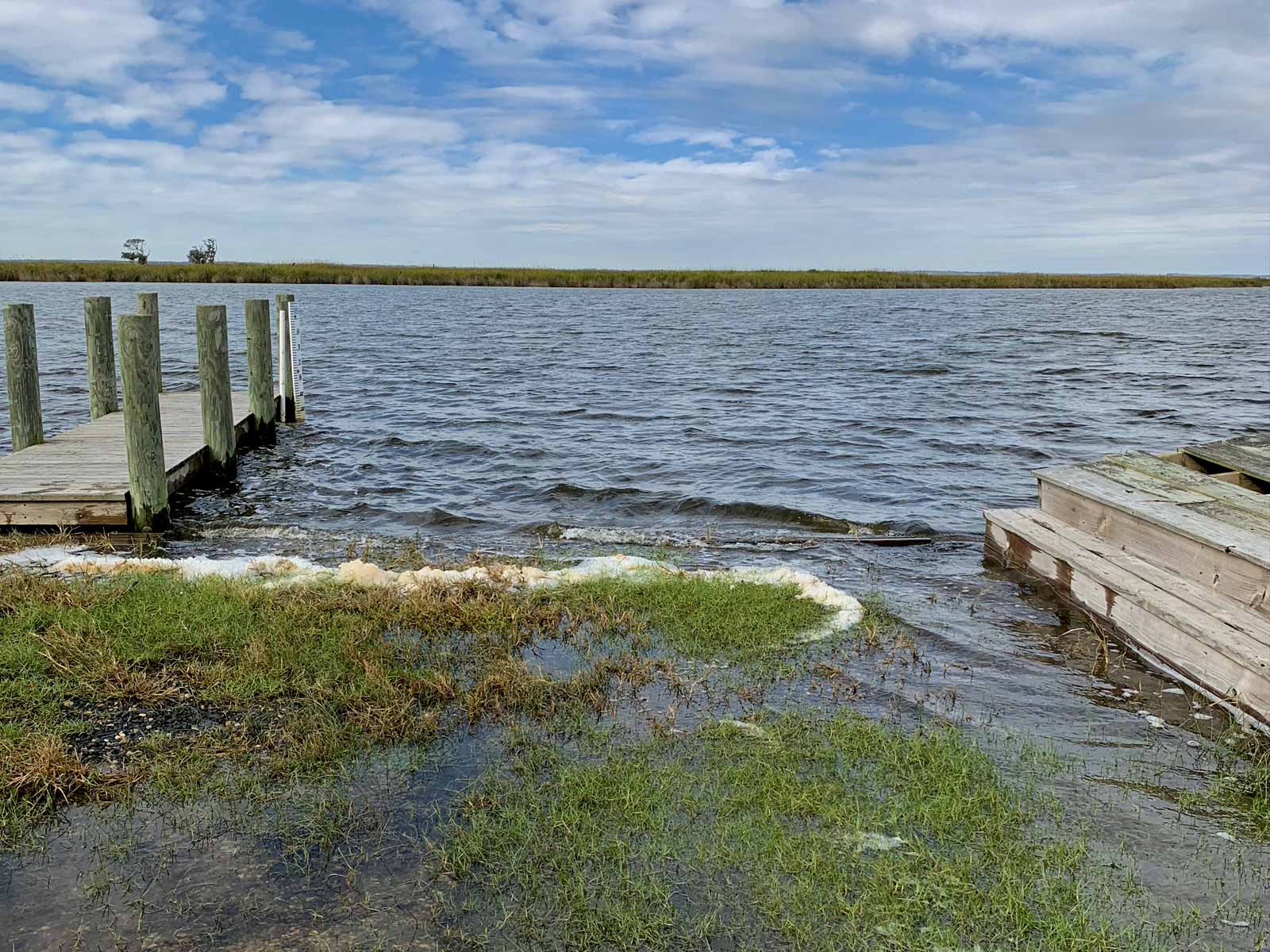 THE FRONTLINE
of CLIMATE CHANGE

eading students through the science and the experience of climate change and sea level rise is powerful and also exhausting. Over the past four years, I have led groups of Wake Forest students to the beautiful Outer Banks of North Carolina. It’s a pilgrimage of sorts for me, back to the place where I first saw how quickly sea level was rising and how the landscape around me was changing. This was indelible, and I knew that students needed to see this for themselves. After years of reading papers and watching the sea level continue to rise, my colleagues I thought we should look for a more positive outcome from this trip. Instead of witnessing and documenting change, we wanted to pose a question to the students. This was new territory for us, so we came up with a guiding question: How might we make the urgency of climate change real, and too expensive to ignore?

As we prepared for our upcoming trip to the Outer Banks, Tropical Storm Michael’s predicted path perfectly entangled with ours. Instead of driving through the tropical storm’s path, we decided on Wednesday to delay our departure, and that turned out to be a good decision. By Thursday afternoon, and now 600 miles from where it made landfall, Michael was uprooting trees, flooding streams and rivers, and downing power lines across the region. Power was out across the Triad and I wondered what this storm had brought across our state. Each year, I have brought a group of students to the Outer Banks, to witness how quickly this area is changing and to better understand the complex challenges that sea level rise and climate change create. Tropical Storm Michael arrived on cue to bring this message home.

Although it is difficult to directly relate storms to climate change, we do know that warmer Gulf of Mexico temperatures contributed to Michael’s enormous strength. Friday morning as we all piled into cars and headed East, we didn’t know what we would find as we followed the storm’s path. The host for our first meeting with The Nature Conservancy at Alligator River National Wildlife Refuge soon called to let me know that the storm had been much more powerful than expected out there as well. Two feet of water filled his basement and farm fields, schools and offices were closed, and he would have to cancel. We heard these stories again and again during our trip and saw the damage to docks and homes. We also saw the incredible beauty of the place and the throngs of tourists and new residents who have transformed this barrier island into a tourism driven seasonal economy built up from shore to shore.

The Outer Banks is at the frontline of climate change. Subsidence and escalating sea level rise combined make this shoreline one of the most threatened in our country.

The Outer Banks is at the frontline of climate change. Subsidence and escalating sea level rise combined make this shoreline one of the most threatened in our country. Even in moderate estimates of 5 ft of Sea Level Rise by 2100, most of this area will be underwater. Despite these predictions, many of the locals we speak to are ambivalent or disbelieving about climate change. Perhaps this is partially because it is a land that has always been defined by weather, wind and water. Every local knows what direction the wind is blowing, and what that means for the water that surrounds them.

Most of us think of the threat of the raging and destructive seas, but here locals know that the water can come from both sides. The Pamlico, Albemarle and Currituck sounds are like a large shallow bathtub, and the winds literally push the water from one side to the other. Out in Corolla, where we were, strong winds from the Southwest push the water from the Pamlico and Albermarle all into the Currituck sound, and over the brim into backyards, basements and roads.

That was just what Michael had done. With the ground still saturated and rivers still swollen from Florence just weeks before, this was a lot of water. Water rises fast too. As we already knew, Michael was unexpectedly strong, and the winds really picked up around 2 AM. From what we heard the next day, most residents were woken by the wind or their neighbors and had to move quickly to move cars and possessions to higher ground. All the water from the sounds was pushing quickly into basements and yards. It was just another storm to many of the locals, but it was also another storm.

We met with Robbie Fern, the director of Audubon’s Pine Island sanctuary Sunday morning. He shows us the mounds of marsh grasses left behind from the storm surge and the water marks on the historic hunting lodge. Even he was stunned by how far the water had come. Unlike many of the folks out here, Audubon is planning for this future. Their capital campaign is underway to lift all of these historic structures 7 ft from their current height. Buildings will be connected by boardwalks, and someday guest and resident scientists will be able to paddle between the structures that are now on dry ground. Although this may sound like planning for a far distant future, when you look closely at both the predictions and the changes already underway, it is clear that without a major change of course, this is just at our horizon.

Despite the measurable change the North Carolina coast is already experiencing as a result of sea level rise, our state has hindered itself from planning for this future.

Despite the measurable change the North Carolina coast is already experiencing as a result of sea level rise, our state has hindered itself from planning for this future. Instead of giving local communities the knowledge and information they need to look forward, our state legislature famously reduced our informed and complex predictions to short term simplistic linear models based upon a very different past. With all of this as background, we explore the beautiful beaches and marshes of the outer banks, and wonder, how might we make the urgency of climate change real, and too expensive to ignore?

IN PARTNERSHIP WITH TWIDDY & CO. REALTORS

Travel to the Outer Banks to see the impacts of climate change and sea-level rise along the coast of NC in our Coasts & Climate Change travel course. Students meet with land managers, conservation organizations, and local businesses like one of our Program Partners, Twiddy & Company Realtors. Learn how businesses like Twiddy & Company live with changing landscapes and how they are planning for the future.