Associate Chair of the Department of Cultural/Applied Anthropology

Steven Folmar (Ph.D., Case Western Reserve), is an applied cultural anthropologist whose main interests are in Medical and Psychological Anthropology, Social Status and Development. He has conducted fieldwork in Bangladesh, India, and the United States, but his primary, ongoing research interests are in Nepal, where he also conducts the Summer Program in Nepal. He is involved with the Center for Global Programs and Studies, assisting with issues of cultural competency at Wake Forest. Dr. Folmar works closely with NGOs (he is on the Advisory Committee of the International Commission for Dalit Rights) and committees in Nepal to help Dalits pursue equal political and social status and relevant development goals.  Folmar also serves on the Executive Council of the Association for Nepal and Himalayan Studies.

A critical concern is also to assist Dalit and other communities in  pursuit of social justice and self-identified development needs. To that end, he helps with raising funds and distributing them directly to such communities, empowering them to make their own decisions about how to use these funds.

For the past decade, Folmar has increasingly focused on issues of identity and social justice for the Dalits, or “untouchable” castes of Nepal. To that end, he has concentrated on the micro-political processes of resistance to entrenched power in Nepal through tactics of identity politics and the politics of anonymity. In their struggle for social equality, Dalits have grappled with how to posit a group identity that can gain enough favor in the national debate on society in Nepal to advance their social and economic goals.

Continuing in this vein, he has recently turned to the connections between caste status and mental well-being. He has conducted two research projects aimed at this issue, the second one, Oppression and Mental Health in Nepal (OMH), was funded for three years by the National Science Foundation.   Currently with one paper under review, he and his co-PIs and  that covers the major findings, that mental health status is best understood from an intersectional theoretical lens.

By now, it is common knowledge that Nepal has recently undergone a devastating disaster, in the form of a series of earthquakes and aftershocks beginning on April 25, 2015. Because his research team had collected mental health data on adolescents living along the edge of the earthquake zone through OMH, he and his co-PIs were ideally poised to study the effects of the earthquake on mental health. This study, Social and Psychological Resilience in Post-earthquake Nepal (Resilience), also funded by NSF, has finished the data collection stage in which they were able to follow up on nearly 60 percent of the original sample and to collect 63 in-depth interviews.  Folmar has presented twice on this project and is currently preparing to publish his findings. 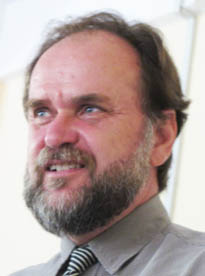